We love this story of how a chance encounter led to a second chance for a happy and healthy life for a stray dog, who is now appropriately named Chance…

This past January, our clients Kathleen and Linda were loading their car after a shopping trip when a stray Pitbull jumped into their backseat. The black and white dog was very tame, but it was clear that he needed medical attention. He was emaciated, and he had severe scabbing up and down his arms and on his sweet face.

Kathleen rushed him over to our hospital for treatment. Upon his first exam it was discovered that he only weighed 35 pounds. Stool testing revealed intestinal parasites that would need to be treated, but thankfully, he tested negative for heartworms. The sores on his body were probably because he had a flea infestation, and they would heal with care and time. Kathleen decided to leave him in our care for boarding services and rehabilitation.

And she decided that his name would be Chance, because this was truly his chance to live a happy, healthy life.
Once he was dewormed, bathed, and given the medications he needed, Chance quickly began to transform. Each day he became friendlier and more playful. His wounds began to heal, his coat became shiny, his eyes became bright, and he started gaining weight!

Kathleen and Linda decided to let us neuter Chance and clean his teeth. By the end of Chance’s three week stay he was in excellent health, and he weighed in at 48 pounds. His transition has been an amazing one.

Right now, Kathleen and Linda are looking for a perfect, forever home for Chance. We are humbled by their kindness and commitment to this sweet boy, and we are grateful that they gave us the chance to work with him. Because there’s nothing we like more than to see a pet get their second chance. 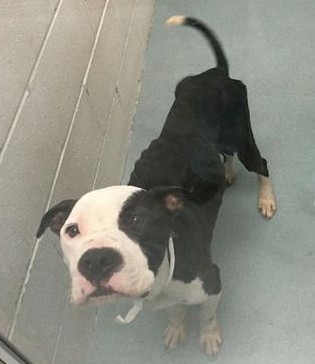