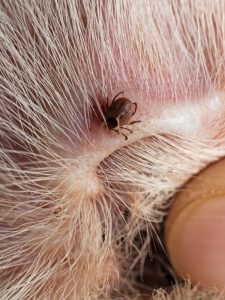 Anaplasmosis. Its name sounds like a weird Indie Pop band, but it’s really a sort of an alternative, less familiar genre of the tick-borne diseases that you know and hate. Lyme and Rocky Mountain Spotted fever may grab the headlines, but Anaplasmosis is an emerging disease which is moving up on the charts.

The Killers. When a tick infected with the bacterium Anaplasma phagocytophilum attaches to a host, the bacteria can move through the saliva into your dog’s bloodstream, infecting white blood cells. If it does, within 1 – 4 weeks after the bite, your dog may begin to display symptoms of Anaplasmosis. These can include lameness, fever, lack of appetite, fatigue, and/or joint pain. Less common symptoms are diarrhea, coughing or difficulty breathing, seizures, and loss of muscle control.

Clinic. The symptoms of Anaplasmosis are also the symptoms of many other diseases, so when you bring a sick doggie to us, we’re going to ask you about possible tick exposure. This includes where the dog has been, and what tick prevention she is on. If we suspect Anaplasmosis, we can run antibody tests to see if an active infection is present. Because the same tick can infect a host with Lyme disease and Anaplasmosis, we’ll screen for both.

The Cure. We usually prescribe a course of antibiotics to kill the bacteria in the bloodstream. If treatment for Anaplasmosis begins in time, the prognosis is good. Left too long, it can cause organ damage and failure.

Yeah Yeah Yeahs. Ticks are a menace to you and your pets, which is why we remind you over and over (and over) to take precautions. (Read triumph over tenacious ticks here.) Ticks that bite your pet and die, as they do with Simparica/Simparica Trio, do not have time to transmit bacteria! So give those preventatives regularly and as instructed.

While we’ve introduced you to several indie rock bands*, we’d rather that you not be introduced to Anaplasmosis. If you do suspect it, however, let us know. We’re not fans, but we know what to do to hopefully make sure that this disease is a one hit wonder for you and your pet.