Could the Medicine on Your Night Stand Kill Your Pet? – Prescription Strength Version 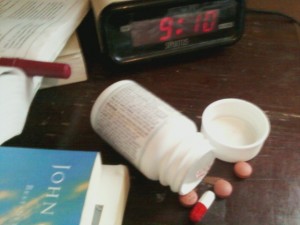 This is part two in a series. The first article talked about over the counter meds that pose a hazard to your pet. This post lists several prescription medicines that need to be kept out of paws’ reach.

Do you take prescription drugs daily? Do you keep that medicine in an obvious place like the night stand or a kitchen counter so you don’t forget? These same drugs that radically improve lives can be deadly to pets if the medicines are accidentally ingested. Here’s a list of drugs to keep out of reach of naturally curious cats and dogs:
1. Methylphenidate (for ADHD) is a stimulant and can dangerously elevate heart rates, blood pressure and body temperature as well as cause seizures in your pet if it’s ingested. Because an ADHD child isn’t likely to remind his parent he needs this drug, it’s highly likely that this drug may be kept in an obvious place to nudge everyone’s memory. Be sure your obvious spot isn’t pet accessible.
2. Fluorouracil, an anti-cancer drug, is used topically to treat minor skin cancers and solar keratitis in humans. It has proven to be rapidly fatal to dogs, causing severe vomiting, seizures and cardiac arrest even in those who’ve chewed on discarded cotton swabs used to apply the medication. Be sure your trash can isn’t pet accessible!
3. Isoniazid, the first line of defense against tuberculosis, is particularly toxic to dogs because they don’t metabolize it as well as other species. It can cause a rapid onset of severe seizures that may ultimately result in death.
4. Anti-diabetics drugs can also cause major problems. Many oral diabetes treatments-including glipizide and glyburide-can cause a major drop in blood sugar levels of affected pets. Clinical signs of ingestion include disorientation, lack of coordination and seizures.
5. Amphetamines (like Adderall) stimulate the central nervous and cardiovascular systems. If your pet manages to ingest enough, he may experience hyperactivity, seizures, fever, abnormal heart rate and rhythm, coma and even death.
6. Nicotine Patches are great product for you – but dangerous for your pet. For your dog or cat that ingests an anti-smoking patch, this product has the potential to produce severe vomiting, depression, elevated heart rate, drop in blood pressure, seizures, respiratory failure or in severe cases, death.
7. Amoxapine and Clomipramine hydrochloride are from the most common class of antidepressants. These psychotropic drugs are dangerous for several reasons. For one, they are rapidly absorbed into the bloodstream, and manifest milder symptoms like lethargy in as quickly as 30 minutes. Secondly, these milder symptoms can quickly progress into vomiting, vasodilation (widening of blood vessels), slowing of the heart, seizures, coma and death.
8. Baclofen is a muscle relaxant that can impair the central nervous systems of cats and dogs. Some symptoms of ingestion include significant depression, disorientation, vocalization, seizures and coma, which can lead to death.
9. Vitamin D derivatives strengthen the bones of individuals who may suffer with osteoporosis. If ingested by your pet, the danger signs may not be immediately evident. Even small exposures to Vitamin D analogues like calcipotriene and calcitriol can cause life-threatening spikes in blood calcium levels in pets. Clinical signs of exposure-including vomiting, loss of appetite, increased urination and thirst due to kidney failure-often don’t occur for more than 24 hours after ingestion.
Again, child-proof does not mean pet proof! Watch for falling pills, and don’t forget to take out the trash. And if you think your pet has ingested one of these drugs, call us right away. We’ll evaluate the situation, and do what it takes to keep your wonderful pet healthy and happy!