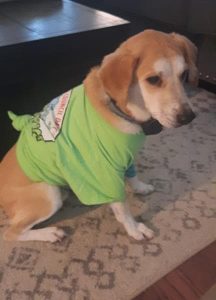 After surgery for a growth on his leg, Gilbert went home to the loving care of his family.

Gilbert needed a comfortable, confined space so he couldn’t run around. The goal was to keep him very calm. His family put him into a small office where he couldn’t run or jump. They could have also used a crate. Anytime that Gilbert was outside the office, his family kept him on a leash.

After his surgery, it was important to keep Gilbert from bothering his incision. There are surgery suits that can be ordered online prior to surgery to let a pet get used to wearing them. The owners can bring in the suit so we can dress the pet before going home. Gilbert’s family opted to put him in a t-shirt which they tied snugly on his back, and other families choose the infamous cone. Some pets, including Gilbert, need to be sedated the first few days after surgery to restrict their movement and to keep them calm.

We emailed medical instructions to Gilbert’s family. These included medicine dosages and frequency. We also told them to call if there are signs of infection or if it seems like there is pain.

Follow Up. Gilbert developed a fluid pocket called a seroma – at the site of his incision. This is not terribly unusual. Because of the location of the pocket, it had to be drained, but most seromas heal on their own. After ten days, he had an appointment to get his sutures removed.

When the pathology report came in, it was good news for Gilbert. Although his growth was cancerous, we were able to get it all, and anticipate no further issues.

Gilbert is now totally back to normal. He’s shed his t-shirt, has been let out of jail (the office), and he’s running and jumping as usual. We’re grateful for a good outcome!