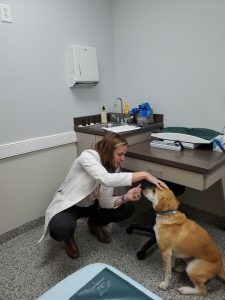 We had a lot of new patients move to Town N Country in 2021. Among them is Gilbert, a four year old shelter rescue who came to us after his former veterinarian retired. Gilbert’s family had heard a lot about our Fear Free practice, and were excited to see if it was a fear free experience for their fur baby.

When Gilbert’s family called for his first appointment, they were immediately impressed by the fact that we asked if it were an emergency. They appreciated the appointment reminders we sent via email and text. We already had Gilbert’s records, so they had no paperwork to complete before they came. If they had, all our forms are online, to make it easy!

On the day of the appointment, Gilbert was a bit nervous because it was a new place, and there were other pets in the waiting room. But there was only a short wait until it was Gilbert’s turn. We asked if it were okay to give him treats, as he walked through the scale for weighing. The treat – and the walk through – made that an easy process. Gilbert had no fear of the scales, primarily because he had no idea he was being weighed. He just thought he was getting a treat.

In the exam room, Dr. Bolynn first got down on the floor to talk to – and ultimately examine – Gilbert. She asked if she could give him a cheese tray, which he loved. It kept him occupied and distracted during his exam. Gilbert was completely fear free during his exam!

Because Gilbert hadn’t complained about ear pain, his family was very surprised that Dr. Bolynn found an ear infection. She recommended a one dose medicine that can be given in the office, instead of twice daily drops given at home for fourteen days. Gilbert didn’t appreciate the convenience of this treatment, and yelped his displeasure, so the vet techs took him to the outside treatment area. The fresh air (and the cheese tray!) did the trick, for another Fear Free win! This was the only time Gilbert was separated from his owner.

Back in the treatment room, we took all the paperwork and even the payment processor to Gilbert’s family, so they could take him and go home without stopping at the front desk.

Gilbert’s next visit will hopefully be for just a checkup, but we’re pretty confident that he’ll be excited, and a lot less nervous. He and his family will know what to expect, and we’ll have the cheese tray waiting for Gilbert, the new guy! 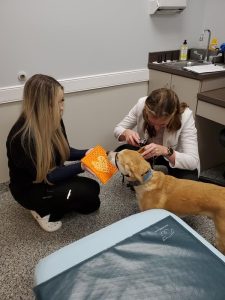 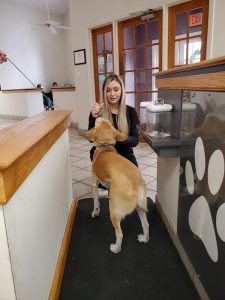