Prudently Partying with Your Pets 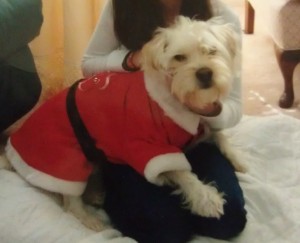 You may already be decking the halls and fa-la-la-ing your way into the holidays, but don’t overlook the dangers your pet could befall when guests arrive, routines change and menus include potentially dangerous foods.
A little forethought can keep the holly and jolly in your winter holiday. Take a look at these six possible hazards:
1. Holy Guacamole, Batman! Avocadoes contain persin, an oily, fungicidal toxin that originates in the pit and is also found in the fruit and the skin. Harmless to humans, avocadoes when ingested by dogs or cats may cause stomach upset that could include vomiting and diarrhea.
2. Drinking Under the Table. Beer, wine, liquor and even foods prepared with alcohol are not a good idea for your pet. Alcohol affects your pet the way it affects humans, except the effect is magnified. Small amounts may cause vomiting, diarrhea, problems with coordination, breathing problems and death.
3. Just the Pits. Beware giving your dog fruit with pits. You know how to spit it out; she doesn’t. Most seeds and pits contain cyanide.
4. Let Me Be Your Salty Dog. Actually, it’s not a great idea. Chips and pretzels may seem harmless enough, but too much salty snacks could result in excessive thirst and urination and eventually sodium ion poisoning. Watch for symptoms that include vomiting, diarrhea, depression, tremors, high body temperature and seizures.
5. Sweetening the Pot. Marketed to those with diabetes, Xylitol’s found in syrups, cookie mixes and brownie mixes, candies and jellies. The early symptoms are vomiting, lethargy and a loss of coordination. Left untreated, these symptoms can lead to liver failure within days.
6. “Thanks for the lovely gift of chocolate!” Holidays usually mean that you have an abundance of goodies coming in. Keep in mind that the darker the chocolate, the more dangerous it is for your pet. Watch for symptoms of staggering, labored breathing, increased heart rate, abdominal pain, vomiting, diarrhea, seizures and death.
While you want to show affection to your pet, a little taste of this or that can truly endanger his health. Love them in other ways! An extra walk or a little more time with the Frisbee or bouncy ball can be great for both of you.
If you suspect your pet has gotten into something she shouldn’t have, call Town N Country immediately. You’ll be advised of the best emergency measures, and when necessary, we can prepare for your arrival to the emergency room.
We’d love to see you during the holidays – but not because your pet partied too hard!
By Sharon King|2020-10-17T07:47:50+00:00December 6th, 2012|Healthy and Happy|0 Comments