We Are Thankful: Rugby & Gov 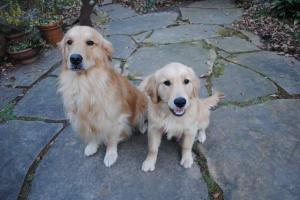 This is part two of our ‘We Are Thankful” series that is highlighting some of the pets that come to Town N Country.
If you think “Rugby” and “Gov” look like your normal household Golden Retrievers, think again. Five year old Rugby is a competitive field dog who runs in hunt tests multiple times a year while six month old “Gov” is still in training and will likely compete in his first junior competition next spring or summer. The puppy began training at seven weeks old, but only for a few minutes a day and as one can imagine the “training” was more like playing at that age.
Owner Jim Lasley is no stranger to working with field dogs as he has almost 40 years of experience. He has trained six golden retrievers and has worked with dogs his entire life. He says he works with his two boys almost every day, weather permitting, doing drills and water work. They keep him company inside the rest of the time.
The Goldens follow hand signals to train and they are rarely used for actual hunting, although Rugby does duck hunt on occasion. When the dogs are tested, the training hunt tests involve a simulated hunting situation, hunting for water fowl, doves, ducks, and geese, using both land and water.
These two follow a special diet using food designed for dogs that perform hunt tests and field trials. Once they do compete in an actual hunt test, Rugby and Gov are not competing against other dogs, they are judged against AKC standards set for retrievers.
We are thankful for Rugby and Gov and the way they inspire us to work hard and keep physically and mentally fit!