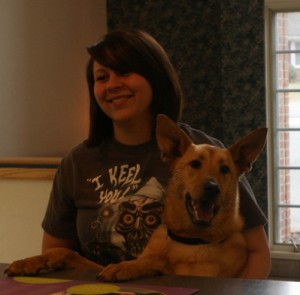 Cody shows off his pearly whites.

February is National Pet Dental Health Month. 80% of dogs and 70% of cats over 3 years of age already have some degree of dental disease. The following illustrates exactly what is entailed when your pet has a “dental”.
Cody’s destiny with a dental started when he was in for a physical exam and vaccines. As part of a routine physical exam, the veterinarian checked his teeth. Cody’s teeth weren’t in horrible shape for a 7 year old Labrador who loves to chew on sticks and carry tennis balls around the back yard. There was tartar accumulating on the crown of his premolars. A few of the points were worn down, but not substantially enough to affect the nerves.
Then we saw it…a huge cavity like lesion on the back cusp of his lower molar. Now dogs (and cats for that matter) do not often get cavities like people do. His lesion likely developed because he’d broken the cusp and that left a space for food and debris (hair and tennis ball fuzz) to pack into. There was a horrible odor coming from that tooth. After removing a blob of food and fuzz, the remaining crown was black and there was a blister-like lesion at the level of the roots on the jawbone. Cody needed a “dental” and a tooth extraction. After pulling his pre-anesthetic lab work and starting on antibiotics, he was sent home until his scheduled dental appointment.
When Cody woke up on the morning of his appointment, he was a little disappointed because he’d not received his midnight snack and there was no breakfast in the bowl either. But the car ride at least distracted him from his grumbling stomach. He arrived at the hospital and was all checked in.
First on the “to do” list was a pre-anesthetic exam. Even though he’d just recently had one, we listened to his heart and lungs, checked his gums and rechecked the teeth in case anything had changed since his last visit. Cody’s exam was unchanged.
Since all was normal on his lab work, the technical staff worked on placing his IV catheter while his veterinarian worked on his individualized anesthesia and pain plan. All the safest protocols were followed- a tube in his airway to protect his lungs from water going down his windpipe and delivering 100% oxygen to his lungs, IV fluids to support his circulatory system, anesthesia monitoring to track his oxygen levels, heart rate and rhythm, blood pressure, temperature and respirations.
Once Cody was under anesthesia, the technicians took digital radiographs (x-rays) of his teeth. We were able to see that the blister like lesion was actually a tooth root abscess. The break on the cusp of the affected molar had allowed bacteria to enter the pulp cavity. The bacteria traveled down to where the nutrient rich blood and less dense alveolar bone meet the root. There the infection started eating away at the bone. Lucky for Cody, all of the other radiographs were normal.
The technician started cleaning away the hard calcified tartar and plaque that had accumulated in 7 years of not brushing. Then she polished the teeth to make sure all of the microscopic etchings the scaler made on the teeth were removed. Scaling teeth, then failing to polish them, leaves a matrix of scratches on the tooth surface, giving bacteria and sugars an easy foothold on the tooth at the next opportunity (i.e. lunch). Next, the circumference of each tooth was probed to see if there were any pockets that might be harboring plaque and bacteria. Again Cody was lucky that no other teeth had been compromised.
Now it was time to deal with diseased tooth. Two incisions were made on the gum line at both ends of the tooth. The gum was pushed back to expose the supporting bone (jaw). You could see the hole through the jaw that was where the tooth was abscessed. The overlying bone was removed with a high power drill. This particular molar only had 2 roots. The tooth was sectioned into both roots. If the tooth wasn’t sectioned prior to trying to loosen it from the periodontal ligament, it would have been easy to fracture his jaw. After sectioning and breaking down the ligament, the tooth roots were easily removed from the socket. The socket was flushed and a bone-building polymer was placed in the socket. Failure to do so would have left a weak spot on Cody’s jaw making it possible to fracture. Then the gum line was sutured closed. Cody received more pain medications, and then was woken up from his anesthesia. Fifteen minutes later he was standing up and wagging his tail, hoping for something to eat. 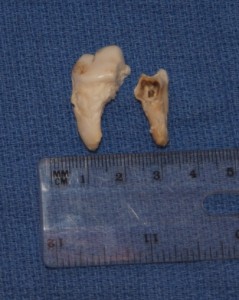 My, what a big tooth Cody had!

Cody went home to finish his antibiotics and pain medications. If this is all the work Cody’s teeth receive, he’ll likely need another cleaning in a few years. If he’s able to have his teeth brushed 3-4 times per week or use a plaque barrier weekly, he may not need his teeth cleaned again for many more years.

Home care really can make all the difference in keeping teeth clean and healthy and if not avoiding, at least spreading out times between “dentals”.
—Dr. King