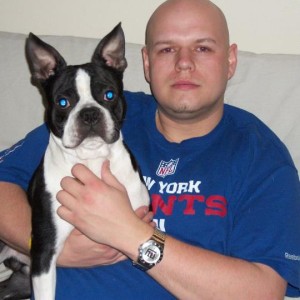 Tuck and his dad

We wanted to share this heartwarming story with all our Facebook friends. A few weeks ago, we started our day meeting a Boston Terrier named Tuck. Tuck was a bright-eyed, big-eared 5-year old that woke up one morning and couldn’t use his right leg. By the next morning, all 4 legs were paralyzed and he could barely raise his head. Because he was paralyzed, he couldn’t get in a position to eat or drink or go to the bathroom.
When I met Tuck he was laying on his side, with no attempt to move. After our exam, we suspected he had granulomeningoencephalitis (GME) which is an immune mediated type of encephalitis that can affect dogs causing varied but sometimes widespread neurological signs. It was recommended that he be seen by a neurologist for an MRI and CSF tap.
Unfortunately, those advanced tests were too costly. We counseled the owner to consider treatment for GME even though we couldn’t be 100% certain that’s what he had without a CSF tap. He needed immunosuppressant therapy that could get quite costly over time. The owner consented knowing that if this didn’t work, they would have to put Tuck to sleep. 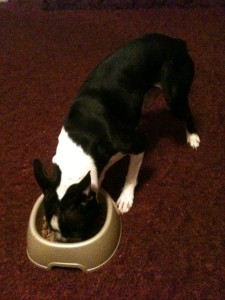 Tuck’s Angel The owner’s employer’s heart was so moved by Tuck’s dilemma that they paid for some of Tuck’s test and treatments. A few days later Tuck was able to move one leg, but just barely. The owners again were afraid they were going to have to put him to sleep. The physical therapy and supportive care he was requiring was wearing them down.
We persuaded them to wait for at least the medications to have enough time to see their full effect. We would even take care of his physical therapy/supportive care during the day while they were at work.
We just had a feeling Tuck wanted to get better. After a few more days, one back leg was working better. On Sunday we received the post showing Tuck standing on his own with his head in his bowl. We were elated to see that Tuck was continuing to improve.
Tuck has been a great, great dog to work with. He never says a word with anything we have to do to him and he’s always a willing participant in his therapy. We are all working for him to get him back to function again, but he’s working the hardest.
Keep up the good work Tuck! We are all cheering you on!
by Dr. King
By Sharon King|2020-10-17T07:45:15+00:00February 6th, 2014|Healthy and Happy|0 Comments