Why Do Dogs Have Floppy Ears? 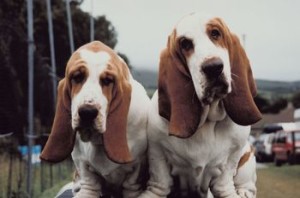 Most scientists agree that the dogs we love and keep as pets probably descended from the gray wolf. The earliest evidence of pet dogs can be traced between 14,000 and 100,000 years ago, but how did the vicious gray wolf first become tame? What started a friendship between humans and wolves?
One theory is that humans took in wolf pups and tamed them. Another is that the tamest wolves out of a pack would paw through trash and eat food scraps the humans left behind. With survival of the fittest, these better fed, tame wolves out-survived their more vicious contemporaries.
As pack animals, the new tame wolves were quick to learn obedience from humans who took on the role of the alpha wolf. Each generation became tamer, eventually combining with their human masters to make a fierce hunting team, sharing the captured game.
So why do dogs look and act different from wolves today? Part of this question is answered by research done by a Russian geneticist, Dmitri Belyaev when he studied how to breed tame faxes. He found that wild foxes, when selectively bred to be tame, would take on certain physical characteristics we associate with dogs. As tame behavior increased, foxes were likely to develop floppy ears, short snouts, spotted coats, highly-set tails and a tendency to bark.
The experiment teaches us a lot about the relationship between appearance and behavior. Animals in the wild depend on their hearing for hunting and for protection, and erect ears mean better hearing. Evidently genes that are responsible for tameness must carry the DNA data for floppy ears and other characteristics of our favorite dogs. Curly tails, lighter eyes, and distinctively colored coats were also developed as dogs were turned into pets.
The list of animals that developed floppy ears as they were domesticated is long, and includes sheep, guinea pigs, bunnies, donkeys, and even pigs.
You may notice that cats are not on this list. Hmmm. Wonder what that means?!